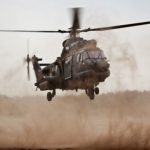 South Africa’s National Defence Force (SANDF) is in a dire financial state, and with no promise of future funding, things may still get worse.

Answering in a recent parliamentary Q&A session minister of Defence and Military Veterans, Nosiviwe Mapisa-Nqakula, said that current plans to get the SANDF back on track are entirely dependent on its funding.

“The prevention of the SANDF capabilities from declining further is entirely dependent on the budget allocation of the Defence Force, which has been decreasing at an alarming rate over the years with a negative impact of the entire capabilities,” she said.

“The Defence Review 2015 has been developed with a plan to arrest the decline of the SANDF but unfortunately no funding has been received to attend to the declining capabilities of the SANDF.”

Mapisa-Nqakula added that the years-long decline of the SANDF meant that it was becoming increasingly difficult to protect the country.

“The defence has become progressively unsustainable in terms of declining defence allocations and have reached a point where the republic must decide on the kind of Defence Force it wants and can afford,” she said.

In a July briefing, Mapisa-Nqakula said that her department has been forced to continuously adjust its plans downwards in response to the declining budget in recent years.

One of the key issues that was raised during the committee meeting was the protection of South Africa’s borders.

That the current deployment of 15 SANDF sub-units along South Africa’s borders are insufficient and that at least 22 sub-units are required.
The need for technological force multipliers to assist deployed forces along the land borders.
Shortages of suitable air assets at the SA Air Force’s 35 Squadron as well as 28 Squadron to effect border patrols.

Other issues identified include:

According to the latest Global Firepower ranking, South Africa is ranked as having the 32nd greatest military strength in the world – behind Egypt (12th) and Algeria (27th) in Africa.

More than 137 countries feature on the list, with the ranking utilising more than 55 different factors to determine a given nation’s PowerIndex.

According to the ranking, South Africa has 66,300 active personnel and 15,000 reserve personnel.

It also estimates that the country has around 14,175,119 citizens who would be fit-for-service should the country enforce conscription laws.

Notably, the country stands out for its land power but has fallen behind other nations in recent years when it comes to air and naval power.

South Africa has a total aircraft strength of 206 assets.

South Africa has a total land strength of 2,888 assets.

South Africa has a total naval strength of 30 assets.

Notably, the country currently has no aircraft carriers, destroyers or corvette-class vehicles.

Looking for Things to do or need a Room, Hostel or Hotel or Car Hire?

This site uses Akismet to reduce spam. Learn how your comment data is processed.